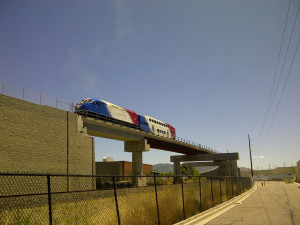 Have you ever taken the UTA Frontrunner commuter train between Salt Lake City and Provo? The McNeil Engineering team provided the civil engineering for the large scale project, named UTA FrontRunner South, that spans almost 50 miles and, according to estimates from UTA, serves almost 8,000 riders per day.

The UTA FrontRunner South project was conceived as an extension for the complete railway, which currently spans almost 90 miles total between Ogden and Provo. The route runs along the historic Utah Central Railroad, built in 1869 to connect the First Transcontinental Railroad with Salt Lake City and acquired by the Union Pacific Railroad in 1878. It’s a modern solution to a classic civil engineering issue: how to meet the transportation and shipping needs of the local community in a way that is integrated safely and effectively for surrounding neighborhoods.

In its modern incarnation, the Salt Lake City to Provo section of the project includes nine stops with park-and-ride lots for commuters. Each stop has a commuter lot, with the exception of the station at North Temple Bridge, and each stop was designed for effective community access and to meet the federal requirements for disability access as outlined by the Americans With Disabilities Act.

The McNeil Engineering team of civil engineers provided the expertise needed to create the site layout for all of the stations, which was designed not only to meet access requirements, but also included technical site details such as a grading and drainage system, a stormwater detention system and design for parking areas, bus loop and pedestrian walkways.

Additionally, McNeil Engineering provided assistance for review and approvals with the various cities and utility providers.

As the UTA FrontRunner South line ran through eight cities and two counties, this was a large scale and complex undertaking that our expert team had to navigate to successfully design the train line, and surrounding amenities for commuters that would use the line.

You might also say that, as part of the project, the McNeil team of civil engineers was helping to plan, design, and engineer the future.

The UTA FrontRunner South expansion was needed to increase capacity for a growing population living along the Wasatch Front. The project was a substantial undertaking to improve options for a growing base of commuters. The train line is a valuable addition and solution to help with traffic congestion, and provide alternative routes for people who might otherwise face traffic congestion.

The project was called for by local, state and federal leaders, and supported with a combination of federal funding, a community supported tax increase, and state transportation budget.

According to some experts, the state of Utah is the fastest growing in terms of development in the United States. The work of the civil engineers at McNeil Engineering provided the framework to shape the present, and give a positive influence on the future.

Civil Engineering And The Future

This case study, and other similar projects, are all part and parcel of what it means to be a civil engineer. Our team is regularly asked to provide the expertise to engineer the built environment in ways that will solve problems for the community. We’re proud of the expertise we provided to bring this site into alignment with needs for expansion along a growing Wasatch Front.

About UsIn 2018, the McNeil Engineering team celebrated 35 years in the community. If you could use additional information about the cutting edge, industry leading services we offer in civil engineering, landscape architecture, structural engineering, laser scanning and land surveying, and roofing and paving consulting and BMI space, please don’t hesitate to visit us online or reach out. 7 Reasons to hire a landscape architect
No Responses.